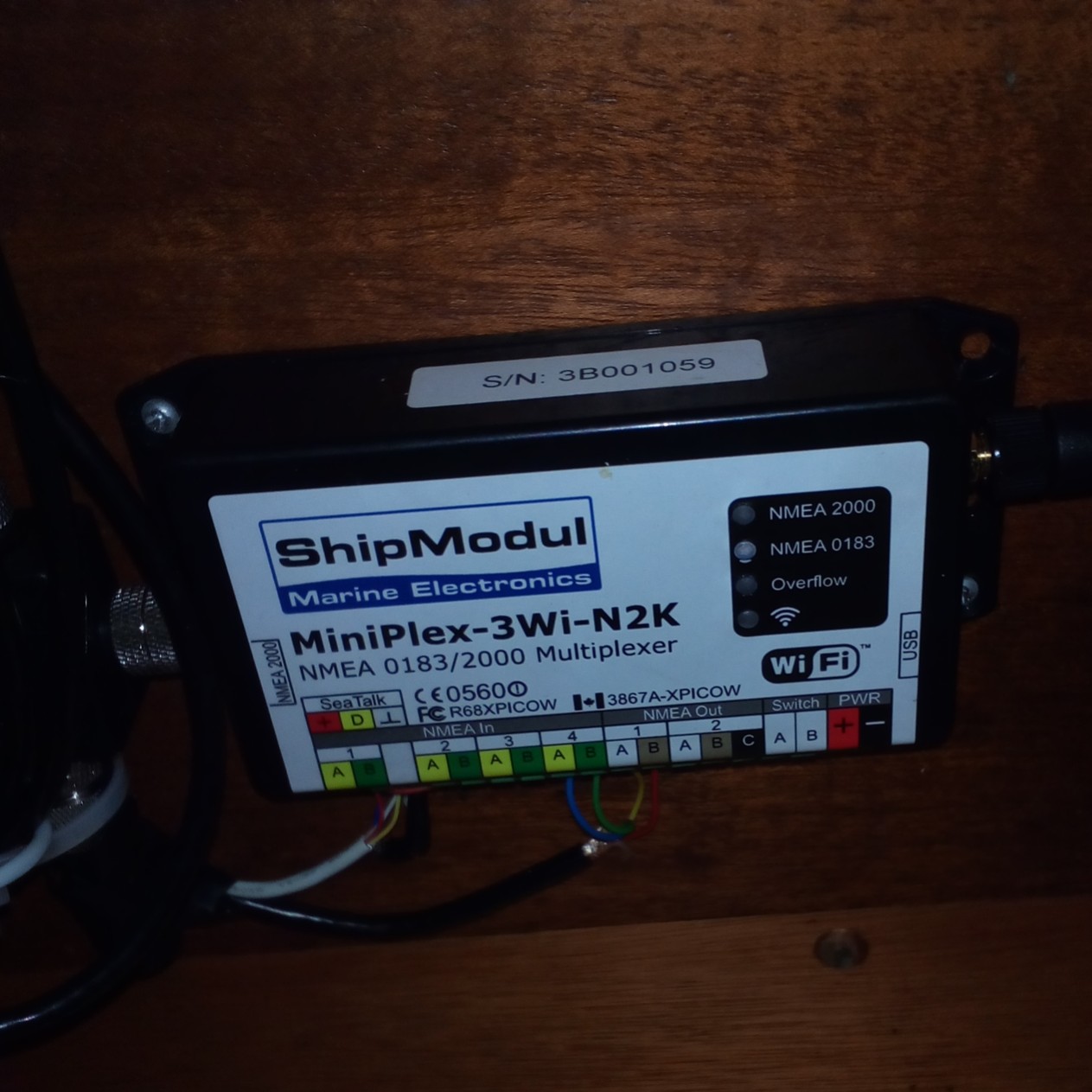 — careful: the post is nerdy and is not meant to be a instruction manual or whatsoever —

When we bought Leonora, I was told that she comes with redundant navigation system which means in clear words that over the time a couple of isolated systems were installed which do not connect to each over. There are

So, a quite nice bunch of electronics. I like the idea to have redundant systems on board. One objective to interconnect the devices was to keep the single island functional on their own. The principle idea was to get available data to the chart plotters and to get the wind vane feature for the autopilot. So let’s have a look on the initial system:

As I do not like to change all things straight away, because it is hard to find any error that will definitely occur, I decided to to the interconnection in 4 steps. First the connection between the plotter was established. It was necessary to put a NMEA 2000 cable from the existing NMEA2000 bus situated in the engine room to the plotter at the console.

Having connected the cables and powering up the plotter the data connection was established automatically. Great! The boat would now appear in the right direction (magnetic heading) on the screen. Unfortunately, it seems that the Garmin autopilot cannot be controlled by B&G plotters. (Please let me know if you know how that works!)

Next a multiplexer (shipmodul) was installed. I decided to put it in a dry place next to the autopilot CCU as NMEA was available there. The device can communicate with SeaTalk, NMEA2000, NMEA 0182 and TCP/UDP (WIFI). Before cutting cables, I was searching the internet for how to get the signals from the SeaTalk bus in the right way. It was difficult to find any specification. So, I decided to cut the cable an solder a simple Y-connection to it: worked perfectly. One could even use the SeaTalk-power line to run the multiplexer.

After setting up the multiplexer-input 1 to SeaTalk, the wind data was forwarded to the NMEA 2000 bus. First primary mission goal acomplished!

The next primary goal was to get the AIS data (position of other ships sends by VHF radio) to the plotter in the cockpit. That is great for curious sailors. What is the name of the ship in front? How fast is it? How close will we get to it? One clicky on the screen and you know it (As long as the other ship uses AIS, too. Commercial ship almost always does.)!

NMEA 0182 is well documented, a sender can send the data to various receivers. Just another cable between the AIS transceiver and the multiplexer was installed. I used an old SeaTalk cable, which I stripped off the boat due to not being used, with 4 conductors and shield. For NMEA 0182 you just need 2 conductors, but I was glad to to have 2 spare conductors in step 4. After setting the multiplexer input to 38,400 baud, the AIS data was available on the plotter  🙂

As the C70-plotter did only get GPS data there is it always send the message to its users: “no position calculation” or similar. That is due to the missing magnetic heading information. Therefore, it would be nice to get the heading data from the autopilot to the C70. I could have moved patched the AIS data though the multiplexer: AIS transceiver -> multiplexer -> C70, but this would mean the AIS would not work on the C70 without the multiplexer on / working resulting in a reduction of redundancy. Fortunately, the AIS transceiver has a build-in multiplexer and it was possible to forward the data through both multiplexer. A was a bit tricky with the software setting, but after a firmware update of the weatherdock it is working.

Perhaps it is worth mentioning that all data are now available on a WIFI-network, too. For some Euros in-app-fee I got all data on isailor on the ipad/iphone which is a nice gimmick.